Find products you are looking for by clicking a category or use the alphabetical index.

Other organic materials, such as rubber, leather, wool etc.

Corrugated fiberboard is a paper-based material consisting of a fluted corrugated sheet and one or two flat linerboards. It is widely used in the manufacture of corrugated boxes and shipping containers.

The corrugated medium and linerboard are made of containerboard, a paper-like material usually over 0.01 inches (0.25 mm) thick. Corrugated fiberboard is sometimes called corrugated cardboard, although cardboard might be any heavy paper-pulp based board.

Corrugated board is manufactured on large high-precision machinery lines called corrugators, usually running at about 500 feet per minute (2.5 m/s) or more. These machines, over time, have become very complex with the objective of avoiding some common problems in corrugated board production, such as warp and washboarding.

The key raw material in corrugating is paper, different grades for each layer making up the corrugated box. Due to supply chain and scale considerations, paper is produced in separate plants called paper mills. Most corrugating plants keep an inventory of paper reels.

In the classical corrugator, the paper is softened with high-pressure steam. After the board is formed it is dried in the so-called dry-end. Here the newly formed corrugated board is heated from the bottom by hot plates. On the top, various pressures are applied by a load system on the belt.

The corrugated medium is often 0.026 pounds per square foot (0.13 kg/m²) basis weight in the U.S.; in the UK, a 90 grams per square metre (0.018 lb/sq ft) fluting paper is common. At the single-facer, it is heated, moistened, and formed into a fluted pattern on geared wheels. This is joined to a flat linerboard with a starch based adhesive to form single face board. At the double-backer, a second flat linerboard is adhered to the other side of the fluted medium to form single wall corrugated board. Linerboards are test liners (recycled paper) or kraft paperboard (of various grades). The liner may be bleached white, mottled white, colored, or pre-printed.

Common flute sizes are "A", "B", "C", "E" and "F" or microflute. The letter designation relates to the order that the flutes were invented, not the relative sizes. Flute size refers to the number of flutes per linear foot, although the actual flute dimensions for different corrugator manufacturers may vary slightly. Measuring the number of flutes per linear foot is a more reliable method of identifying flute size than measuring board thickness, which can vary due to manufacturing conditions. The most common flute size in corrugated boxes is "C" flute.

The choice of corrugated medium, flute size, combining adhesive, and linerboards can be varied to engineer a corrugated board with specific properties to match a wide variety of potential uses. Double and triple-wall corrugated board is also produced for high stacking strength and puncture resistance.

Most corrugators are two knife corrugators, which means that they can produce two different sheet lengths side-by-side. This leads to an optimisation problem, known as the cutting stock problem.

Packaging engineers design corrugated boxes to meet the particular needs of the product being shipped, the hazards of the shipping environment, (shock, vibration, compression, moisture, etc.), and the needs of retailers and consumers.

The most common box style is the Regular Slotted Container (RSC). All flaps are the same length from the score to the edge. Typically, the major flaps meet in the middle and the minor flaps do not.

The manufacturer's joint is most often joined with adhesive but may also be taped or stitched. The box is shipped flat (knocked down) to the packager who sets up the box, fills it, and closes it for shipment. Box closure may be by tape, adhesive, staples, strapping, etc.

The size of a box can be measured for either internal (for product fit) or external (for handling machinery or palletizing) dimensions. Boxes are usually specified and ordered by the internal dimensions.

Box styles in Europe are typically defined by a 4-digit code specified by FEFCO: for example, a regular slotted container (RSC) is coded 0201. FEFCO styles are normally the basis for more complicated special designs that incorporate, for instance, locking tabs or internal fittings.

Boxes can be formed in the same plant as the corrugator. Part of the scoring and cutting takes place in-line on the corrugator. Alternatively, sheets of corrugated board may be sent to a different manufacturing facility for box fabrication; these are sometimes called "sheet plants".

The corrugated board is creased or scored to provide controlled bending of the board. Most often, slots are cut to provide flaps on the box. Scoring and slotting can also be accomplished by die-cutting.


Corrugated fiberboard sometimes known as corrugated board or corrugated cardboard, is a combined paper-based material consisting of a fluted corrugated medium and one or two flat linerboards.

There are also multiple names for containers:


Cardboard and other paper-based materials (paperboard, corrugated fiberboard, etc.) can have a post-primary life as a cheap material for the construction of a range of projects, among them being science experiments, children's toys, costumes and insulative lining.

Old corrugated containers are an excellent source of fibre for recycling. They can be compressed and baled for cost effective transport. The baled boxes are put in a hydropulper, which is a large vat of warm water for cleaning and processing. The pulp slurry is then used to make new paper and fiber products.

Mill and corrugator scrap, or broke, is the cleanest source for recycling. The high rates of post-consumer recycling reflect the efficiency of recycling mills to clean and process the incoming materials. Several technologies are available to sort, screen, filter, and chemically treat the recycled paper.

Many extraneous materials are readily removed. Twine, strapping, etc. are removed from the hydropulper by a "ragger". Metal straps and staples can be screened out or removed by a magnet. Film-backed pressure sensitive tape stays intact: the PSA adhesive and the backing are both removed together.

Materials which are more difficult to remove include wax coatings on corrugated boxes and "stickies", soft rubbery particles which can clog the paper maker and contaminate the recycled paper. Stickies can originate from book bindings, hot melt adhesives, pressure-sensitive adhesives from paper labels, laminating adhesives of reinforced gummed tapes, etc.

Corrugated fiberboard shredders are now available which convert post-consumer corrugated board into packing/cushioning materials by means of a specialized shredding process.

Cardboard goods are transported in packs (unpackaged, strapped with plastic strapping), bales, packets or paperboard cartons and in rolls.

Incorrect handling during loading and unloading and storage entails the risk of damage. As a consequence, in the case of rolls the layers become unusable over the depth of the snags. They are then fit merely to be torn off (stripped down) and used as Waste Paper. Packs and bales must not be lifted by the strapping, as this may break.

Incorrect cargo handling may result in distortion of paper rolls (ovalization). Rolls exhibiting marked ovality can no longer be used for printing and have to be rewound.

During cargo handling, temperatures below 0°C are also permissible for short periods. The product must be protected from heat sources and intense solar radiation in order to avoid brittleness, yellowing, buckling and an increased fire hazard.

At a water content of < 5%, brittleness and shrinkage of the fibers occur. Since stacked sheets cannot enter into a free exchange of moisture with the ambient air, this equalization is limited to the edges in contact with the air. This causes bulging of the edge areas and unwanted buckling of the board, which is promoted in particular by intense solar radiation.

Moisture- or wetness-damaged carton board suffers depreciation due to linear distortion, torsion phenomena, changes in smoothness and color, reduction in mechanical tensile strength and waviness. When stacked, excess moisture leads to swelling of the fibers at the periphery, the edges becoming wavy. This damage is irreversible, since drying leads to warping due to inner tensions resulting from non-uniform distribution of the moisture within the sheet and to staining (drying rings).

Cargo sweat is particularly likely to occur during voyages from cold to hot climates or during unloading in tropical ports if the goods were not sufficiently warmed up during the voyage and were exposed to the hot ambient air upon opening of the hatch covers or container doors.

On voyages from cold to hot climates (Scandinavian ports, Continental ports - tropical unloading ports in Africa, Asia), every possible opportunity for warming the paper must be used to avoid cargo sweat.

Cardboard goods are combustible and should therefore be protected from flying sparks. Smoking must be strictly prohibited. When stacked, it has a tendency to heat-induced spontaneous combustion.

Cup board must be kept absolutely clean since it is used in the food industry. Its physiological suitability for food use must be ensured.

Cardboard goods are very sensitive to mechanical influences such as pressure, impact and friction. The risk of damage is greatest during cargo handling.

Ovalization of the rolls, arising as a result of excessive stack pressure where rolls are stowed horizontally, since forces are borne solely by the linear bearing surface. In the case of newsprint, damage to the inner core results in interruptions in production or in problems during handling, as the rolls can no longer be lifted correctly. Slight distortion of the core may be remedied. Very oval paper rolls are no longer suitable for printing and are rejected by the receiver, thereby generally entailing total loss, or they have to be rewound, entailing rewinding costs and wasted time.

Telescoping of the rolls is caused by pneumatic cargo handling equipment, the rolls being extended in the manner of a telescope, which always results in total loss of the rolls.

Indentations occur both in the roll sides when the rolls are stowed horizontally and in the end faces when they are stowed vertically and are generally caused by residual dirt from earlier cargoes, uneven set-down surfaces and being pressed against structural parts of the means of transport, and also by cargo securing materials.

Edge damage arises when laying down vertical rolls or standing up horizontal rolls, by stowing rolls of different diameters on top of one another or if overhanging roll ends are not adequately supported and by shocks or impacts sustained during cargo handling.

Tear damage: snagged layers result in considerable paper losses, as the rolls become unusable to the depth of the snag.

Rolls must not rub against (chafe) each other or other items; points at risk must be padded with paper bags and air cushions or the like.

The percentage loss caused by snags to rolls can be calculated according to the following formula: 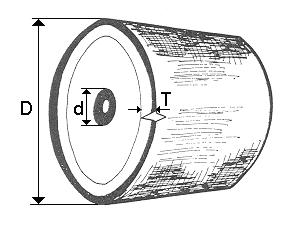